The Day Rocky Introduced Himself

Theresa and I were performing the finishing touches on the new roadside sign installation out front, when I saw this racoon strutting along coming up behind her. Obviously, he had not seen us yet because he was getting very close. I silently motioned to Theresa to turn around to see him. About the same time, he finally saw us and stopped dead in his tracks no more than 5 feet from us. He sniffed us out and then changed course to the nearest tree where he could watch us from a safe perch. I was going to call him Bandit, but my web designer Rebecca Murray from Skagit Media Marketing named him Rocky. So let it be written, so let it be done. 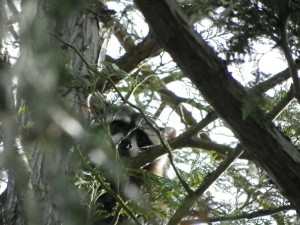